A downloadable programming language for Windows and macOS

Monkey2 is an easy to use, cross platform, games oriented programming language from Blitz Research.

Monkey2 is zlib/libpng licensed and the full source code is available from github.

Occasional 'release' packages are also created from time to time and are available from this site. Packages are only built for Windows and Macos. To build monkey2 for Linux you'll need to build from the github source.

The packages includes a custom IDE written in monkey2 itself, however if you're on Windows you might also  want to check out the 3rd party Mollusk IDE here.

User Danilo has kindly set up some forums here: http://monkeycoders.boards.net/

Long time Monkey 1 and Monkey 2 user Pakz, has created an excellent set of examples to get you started in Monkey2.

The author of the excellent TimelineFX module and editor has a tutorial series in 14 parts available on GitHub here:

This video serves as an nice introduction to rendering in Monkey2.

This video serves as an nice introduction to  Strings, Math and Arrays in Monkey2

I rarely use Blitz softwares but  I think that many people still use them here.
https://www.syntaxbomb.com/index.php?action=forum

this is a masterclass in how to take something people love and take a community that was once vibrant and then systematically shit all over it until its dead.

BIG true. I'm still salty of the mismanagement, the dropping of the ball on development, the indifference to big opportunities, the unwillingness to... I'm sure they blame the community too instead of themselves. I'm sure they hate people like me even though I supported them, bought many licenses over the years, and shilled Mark's tools again and again. But NEVER AGAIN. I'm using Defold now and am super happy. But I'm still salty that these projects nosedived and were more or less abandoned.

Can someone tell me what happened? I used BlitzBasic back in the day and was happy to see, that this thing is still alive and got a successor ...

You probably know after BB Mark made Blitz Max, Max was really good, at this point the community I would say was at it's peek, the forums covered BB3D 2D and Max, and he had an active community for all of those languages, over time most people moved to Max but those other languages still had active posters, and those posters often took things done in Max and redid them in B3D and 2D it was a good time.

Mark then made what I would argue is his crowning achievement in Monkey and this is where the shit just hits the fan, First of all the name, I still want to know what drug he was on when he thought something with such an insane search term would be a good fit, you it was near impossible for ages to find anything monkey related without being flooded with actual bloody monkey results, the next major mistake was splitting the community in two with a new utterly garbage site with some of the worst design iv seen in my life it was a total mess, and I and others were constantly posting suggestions and requests to try and get him to change it lot of us even offered our help free of charge, he eventually got a new site design which was still not brilliant but it was better.

So at this point the community is now split, the monkey side is a fraction of the numbers on the blitz community, but both communities felt this split hard, the blitz side felt abandoned by Mark, and the monkey side felt shit about having so few posters and missed the thriving feel of the old forums, but things were improving slightly over time as the monkey forums grew.

Thank you for this recap. So Cerberus X is the remaining pice, thanks for pointing me in that direction. I was allways wondering where all the community has gone. Even the once very active german forum blitz-forum seem to be not very active now and i was allways wondering why there is no Monkey related content. A bit sad ... Basically i learned coding with Blitz3D back then - bought the Language and the only german book there was :D

The new forum is at monkeycoders.boards.net.

Get the newest informations in the Monkey 2 Discord Chat.

http://monkeycoder.co.nz is down for maintenance. Any news ?

Why nothing is working? i got "Internal mx2cc build error" every time i run or build something, i actually tried to run the included examples, it was working fine under Windows 7 x86, but i got the same problem on Win 10 and Win 8.1 x64

By the way... the new itch.io 25.x series has the .pkg format for installers blacklisted, so Mac users see no installable files.

Any chance of this coming to linux?

Several people have it going on x64 Linux already:

Feel free to ask questions in the forums (or here, but there are more people at forums).

Did you install the required dependencies (for me on Debian, all available as development packages from standard repositories--on your distribution, it may be different) and run rebuildall.sh (not as root)?

Then you can run the file it produces in the main folder as a binary, just run it from a terminal in that folder (see below).  Works with standard stuff so far but my college courseload is too much, I have to wait until this Summer to really sink my teeth into it and make any progress on the stuff I have planned.

Mark really deserves some help over on Patreon, if you are going to use his work you should send some money his way every month... 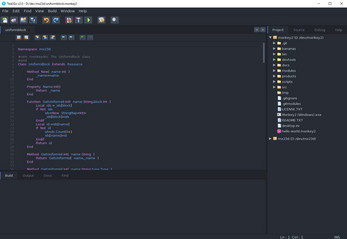 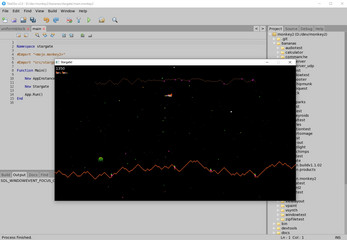