A downloadable tool for Windows

No ebook though sorry!

I've run into an issue today. When I try to open Blitz3d on my Win10, the icon shows in the taskbar, but no IDE screen appears, and the taskbar thumbnail preview is blank white.

When I right-click the task, there's the options: ide.exe, and the usual pin to taskbar & close window.
Clicking ide.exe the first time gave me an error saying the blitzpath environment variable wasn't found.
So I created that.

Now when I try to open Blitz3d, I get the same results.
But when I right-click the task icon and choose Ide.exe again, it opens another task pointing to C:\Program Files (x86)\Blitz3D\help\index.html. But that task doesn't show anything either.

I just tried downloading and installing the latest version here with no luck.

Anyone have any idea what is wrong?

Has anyone tried using chat GPT to update the code and make it work with better graphics and DX12?

Very cool, but am I the only one who has problems with the IDE? It just changes the font when I type in something after opening a saved .bb file :/

It's normal, i think bc you copy-pasted something

The source code also given here. How nostalgic:) hope someone great will revive Blitz3D with modern features but still in BASIC

I boot this up from time to time for the nostalgia. I started learning how to program using B3D back in ~2003. I doubt I'd be coding as a career if I hadn't came across it. Nice to see it's still knocking about! :)

Hi Mark, and everyone else!

I'd be interested in hearing your thoughts on the strange behaviors outlined here:  https://itch.io/t/1985876/still-not-perfect-on-windows-10

Hi Mark! I am taking part in a game jam with a small dev community in Spain and will use Blitz3D and Maplet for it (it's a retro compo, most of us are using "legacy" technologies, and I like the idea of the game working on Win9x).

Do you happen to have the specs of the .maplet format by chance? I'd like to extract the information of the lights from it to use it in the game.

BTW, I love playing with Blitz again! I used it for a long time a couple of decades ago, used to visit BRL's forums under the nickname "Jedive".

Unfortunately, I managed to lose the source code to Maplet shortly after finishing it so I have no idea how it works any more.

Probably possible to hack the file format but unlikely to be easy. But knowing early 2000's me, it's likely to use an 'IFF' style file format, eg: chunktag/chunksize/chunkdata...etc etc, where chunk tag is a fourcc 'character code' like 'LIGT', 'PRIM' etc Just guessing really though!

Thanks for your reply, Mark!

Definitely, software version control systems were not very established back then lol.

Unfortunately, I have tried what you suggested, but there are not easily identifiable tags within the file except for "BB3D" and "_BSP" at the beginning of the file.

Since the amount of lights won't be very big (it's a small game for a compo), I think I'll just write their position, color and radius manually on a separate file and use that.

Great to see that you are active and I am really looking forward to see your future projects (although I assume they won't be related to Blitz/Monkey!).

Any classes how to use it?

I mean, I know basic is pretty simple as the name BASIC implies. Blitz Basic uses a different dialect like the language of Spanish is between Mexico and Spain. (And yes, that's a thing; they both speak Spanish, but use a different dialect.)

But I do need to ask 2-3 big questions.
1. Has ANY game recently been published using Blitz basic with a proper Polish and sold for any amount of $5 (USD) and above?

~Note: By Proper Polish, I mean bug's worked out, game operates correctly with a lack of bugs. ETC.

2. Is anyone building a game with it right now? Mind you, I know folks mostly get this to fool around with code or to teach their kids how to program games or simple programs, I get it.

3. Yeah, back to the beginning comment, any classes how to use it today? Like a general education to use and push it to the absolute limit. How to render something you made in Blender and throw it in there or how to make a 3D model in it? if the 3D Modeling tool's in Blitz suck, is there an alternative?

I'm asking out of pure curiosity. Mind you, I would like to know everyone's thought's about it.

You've probably heard of SCP: Containment Breach if you've heard of Blitz3D, or at least I'd hope. It's a pretty damn good game and made with yours truly, Blitz3D. No, it's not quite recent, but it's seen a Steam release of the multiplayer mod, and (not counting the latest version on Steam because it's become sort of a buggy mess, I'd recommend checking out the ModDb page here) is quite polished.

To answer your second question, I am, but I guess I don't have any real authority in the game world yet. I just like using older engines. I'm working on a minecraft-type clone in Blitz3D, which will be interesting to see if it works and fast enough to be enjoyable.

To answer your third question, I would say your experience with it depends on how complicated your normal programming adventures are. Honestly, I find the language very basic (ha, but it is BASIC so it is to be expected) and you can't do things like function dereferencing. Also, if you like writing nice and neat code, get ready to use your Tab button (or if you're a psychopath and use the spacebar) like crazy, there's no auto-indentation. For modelling, you can most certainly use Blender. It doesn't natively support .blend files, but it does support .3ds and one other file format for 3D models (something like that), which Blender supports. Hell, you can even write your own model file implementation, but I would not do that for a few reasons, mainly that's a lot of work and you'll have to do a lot of stuff in BASIC, which isn't exactly fun (at least, not for me).

Now, as for making games for modern day, just as with any programming language, it's not about the actual code, it's about the how. I believe that you can make a fully-fledged triple-A game (well, you most likely won't have hyper-monetization and thank god for that) in any programming language. Even brainfuck. Actually, that seems kinda fun now. A brainfuck CPU, with a... oh I'm going on a tangent again.

If you need me to clarify anything, please, let me know :)

Also, I love your metaphor of dialects. A very simple yet powerful way to put it!

I have used it back in the day to make my first games.
There are maybe some old forums around with some nice tutorials since that was a thing back then. blitzforum.de is a german website with a lot of german blitz ressources, but I don't know about english equivalents.

I learned it by mostly looking at the examples and being active a lot in those forums.

While it's pretty outdated, the main difference to modern game engines is probably the lack of a world editor so for every bigger project you need to build you own. You literally have just your code and that's about it. It's great for building simple games tho or learning programming in general.

scp containment breach was made on this 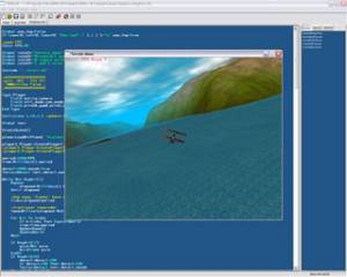